I'm painting right now and observing myself: What goes through my head, what I think about when I paint. I paint large two-dimensional forms with a large, wide brush, but also fine lines. These are structures that are replaced by individual settings. I am more and more concerned with sensitivity and precision in the application of the paint with the brush, the spreading on the canvas or here on the paper, the spontaneous action and the process that is represented by it. In the background music by Philipp Glass "Facades". The whole thing just gives me a feeling of hope, the great power at the bottom of melancholy, as an antipole to the non-existence of being, which I cannot perceive as such. In the moment of painting I feel myself and understand existence through what I do and therefore am. And I see this in the spread of a white spot, its shape on a broken green background. There is exactly the subject that interests me. Sometimes I want to formulate it very precisely, to record it in a linguistic form that is more comprehensible than it appears in colour. But of course that is not possible in this way: the beautiful is the picture and the beautiful is the colour, if it works, if it has an immediate effect through the senses. Clear simple colours, that is what I am looking for. There are the moments of the deeply broken, the melancholic being in me, the laziness, the boredom, the hopelessness, the senselessness of painterly doing, the non-existence, the unbelievable. And then there is the moment when it works, the confirmation when it works.

The question of painting is not which colour the existing picture demands, but my impulse must define itself in relation to the existing. Thus discussion, dissonance, resonance, a relationship between the existing pictorial space and the momentary intervention, a reaction, a solving, an appearance at the moment of painting in relation to the existing colour tree: space, system, line, solo are musical ideas of improvisation, of allowing relationships to fade away. And again and again the question of my own place, the space I have to take up, the space the blue needs or the red when it spreads out on the yellow space. The background, the existing image, is a space. I always react to a colour space. And I intervene with a line, a point, a system, with a surface, a destruction, in other words something motivated from within me, I take up a counter-position, one that is different from the space. I enter into communication with the colour space through the moment of setting. This inevitably creates a tension, which sometimes lasts and is good, but often dissolves, fades, dilutes, adapts and in the long run does not hold the tension. In this way different qualities are created. It is never about, and this is important to me, pursuing a creative methodology. Although the techniques used are certainly shaped by formal experiences, I am definitely not interested in formal investigations: no working off of possibilities, no declining, no conjugating versions, of constellations, but always in the moment of the new intervention, the new idea. And the idea is nothing more than the current standpoint as a painter. From this living position any form emerges and is therefore pure content. It emerges from the consciously experienced, the forgotten, the unconscious, the not yet known, the sensually experienced, as a clear statement against repetition, against system, against working through themes, techniques and tricks and above all against chance, which always wants to reach out its hand to me at the moment of painting. Coincidence enchants, confuses and is my strongest challenge and inspiration, but it also challenges me again and again to define and represent myself in the moment of doing. In other words, the paint on the brush goes onto the paper, onto the colour space and represents a singular, an isolated spot of colour, a line, a glaze, a figuration that asserts itself against space. Basically: figure and space, as a deeply autobiographical theme; against the randomness of being I set my autobiography. Through my painterly working line, a sense of meaning emerges, which defines me as a self, but also as a human being, as a social being, as a political being, in the group. Whereby my motivation arises mainly from a melancholic, ego-feeling being. I paint with the great hope of discovering something new. Painting is thus a process and documentation at the same time, which forms a kind of person, an artistic person. In the moment of painting, the picture is actual, the space is tangible. A now is created, which dries with the paint, becomes the past, the picture.

The image is a document of past existence, the colour space is an interpreted image. Painting is the timeless creation of a new now. This cycle is the artistic process, an autobiographical process that confirms itself, criticises itself, tries to be open in the moment of creation. My criteria are: Boredom, coincidence, space, rhythm, sound, landscape, illusion, balance, contrasts. The criteria of the observer basically originate from his own observation, his position towards society, therein art, therein different artistic forms, therein painting as a formal colourful experience of different forms and techniques. The own experience, the own perception interprets, feels directly and tries to understand, to explore, is superficial, feels challenged to look behind the surface. Repeated glances are provoked, associations arise, connections to others, to the pictures in the bag that you have brought with you.

The reference to my autobiography creates a self-conscious mirror into which the viewer looks. This mirror remains unfathomable, especially in its openness and critical faculty, impenetrable, indecipherable and thus a work of art. 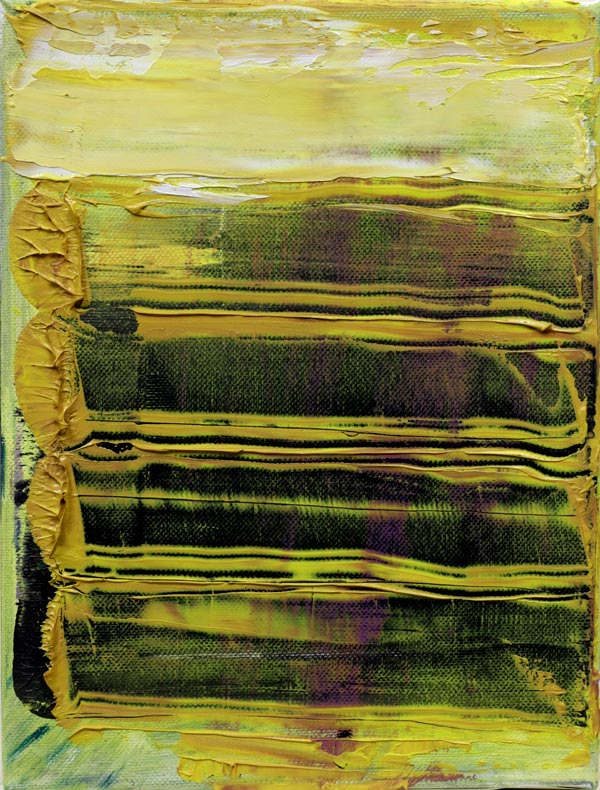