The Sound of Images
Interview with Andreas Fuchs (12.2.21)

Axel Plöger: I have always looked for that in the pictures, this powerful freedom as in de Kooning's work and then to set this clear frame against it.

AP: Yes, the frame in the sense of events and framing of the picture. The frame is the encounter with the space in which I exhibit, with the viewers. There is a very external form that counteracts the picture.

AP: Yes, it's this effect, you know when you mask something off in painting and then a free structure comes over it, a very moving story, and then you take the masking off again and then you have a very clear edge. Something happens there. Or even if you put a white frame over a picture and cut something out with it, something happens, at that moment you put the focus on a detail of the picture and it gets a very strong form from the outside. Through the demarcation, through a focus that is set.

AF: But if you put a passe-partout over it and focus on one aspect of the picture, then you cover the rest - under this passe-partout the picture continues. And that's exactly what I mean, I had wondered a lot: At the last exhibition "Stark" (LKB, Eichenmüllerhaus 2020) your wonderful pictures were hanging there in the corner and then Axel suddenly came and put a frame around the pictures. Then I thought that there was no need for a frame for your pictures, because they are designed in such a way, or at least these pictures were, that they can be thought further over the edge of the frame.

AP: I think it's just so good. The frame gives the pictures more power. It is precisely this demarcation, this focus, that is the moment of specification, of what I mean. Of course, the picture goes beyond that. I arrive here in the studio, my pictures begin at some point and end at some point. It can be a process of months. And I do it on several works at the same time. It's a process like a network full of ideas and feelings. But I set such frames to create statements.

AF: So that means that you are signalling: the process is over for this specific situation.

AP: Yes, I am signalling: this is my precise statement, this is exactly what I want. Of course I can continue to paint the picture. But the fact that it has just come to an end in this state or that it has been stopped as a kind of present-day shot, that only happens because I want to formulate something at this moment. Because I say: this is my picture now. This is my song. There has to be decision and also precision for me. That's what the viewer sees, what he should see. There is a very clear decision, even if much else in my work is chaotic, emotional and autobiographical. This is an important moment, precisely because I have a very intuitive, often grossly motoric way of painting with broad palette knives and thick brushes. Not every painting has to have an actual frame, especially if you have slightly thicker stretcher bars and rough canvas, then it looks so good. But the essence of the frame is the precise statement.

AF: When several pictures come together, that is, a second one appears at a distance of ten centimetres, that one sits next to it, and then there is another one above it. A dialogue, a conversation develops between these images. As a recipient, you compare them, you look at how they are made, are there similarities and how do they speak to each other. Is that then also a conscious setting and does this frame as a reference to the independent position of each picture help to continue this dialogue or is it perhaps also a bit of a hindrance?

There are also many colleagues who paint on the frame, paint beyond the picture. I could do that too, of course. In that sense, I could also leave out the canvas and apply the paint directly to the wall, but that would not be something that suits me. The painting happens in the pictures, that's my internal process in which I move and precisely that is a liberating and important moment for me when I put such a clear structure over it. I really need that, it is a support in all this decision-making and also a demarcation in the presentation to the audience. 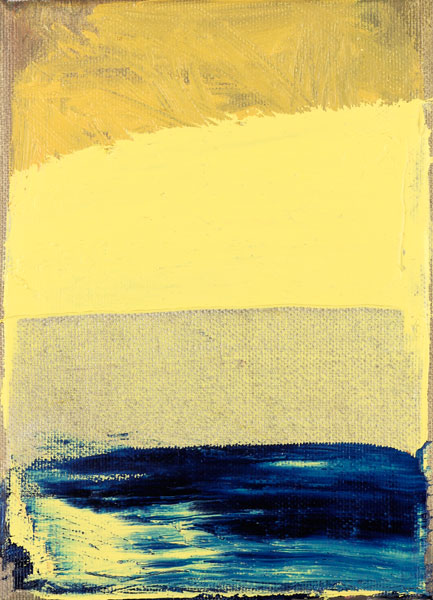