The designation of an artist as a painter often evokes stylised ideas in the art public - from the academy class to the eccentric painter prince. But when looking into the studio, it quickly becomes clear what they all have in common: being a painter means above all getting involved in a painterly process. Mixing colours and applying them with a brush or spatula, but also dripping, flowing, spilling, scratching or scraping and often taking them away or painting over them. The studio of a painter therefore usually bears clearly visible traces of this painterly process - as does the studio of Axel Plöger. [...]
I first met him about ten years ago in the museum. He came to Marta Herford with a portfolio of works on paper, put them on the table and invited me to flip through the large stack of expressive A4-format portraits. Like a diary he dealt with faces - his own as well as other people's faces. With just a few gestural strokes in a rather narrow range of colours he captured the different heads and captured their respective expressions.

One year later he devoted himself intensively to "invented landscapes" - forest motifs, often in bright, glaring colours. During a first visit to his studio he showed me this extensive series of large and small canvases and works on paper. Vertical tree structures are crossed by diagonals and horizontals, creating a thicket of lines and shapes. These depictions of forests, which probably reflect the wild growth of a South American jungle rather than the orderly regularity of a Westphalian forestry, were further proof to me of this painter's obsession. Although he has treated very different motifs over the years, the artist's special passion for the painterly process is expressed in all groups of pictures. This was already evident during his studies. Teachers and fellow students tried again and again to persuade him to preserve something that had been created and to let it stand. "My daily results were often intoxicating for me, they made me happy, I had discovered and understood. But the very next day I was able to get back to it in contempt, took a still dirty brush out of the bucket and plunged headlong into new problems with destructive joy".

Even after more than 25 years, it is these painterly questions that keep the artist busy. He loves the intoxication of colours and forms that can arise in the process of creation. In his studio, he is passionately dedicated to the exciting interplay between the urgent movements of the material and his own, often intuitively made decisions. The destructive, obliterating intervention of the artist is also permissible, so that something special is created: "It is the moment of the renewed destruction of a finished painting and the possible beginning of a new one. His paintings are created through experimental actions that leave their traces on the surface of the picture carrier under the concentrated eye of the artist. From a sequence of different painterly moments, rhythmic connections of form and structure emerge, which rather evoke loose associations with nature than represent concrete landscapes or still lifes. Generous forms interweave with small, nervous structures and are staggered one after the other. Alternately they either block the viewer's access or even pull him or her in. Strange colour tones and clear structural contrasts between transparency and thicket mean that the observer is nevertheless willing to follow the artist's movements. The individual steps of the process of creation cannot always be reconstructed. Illusionistic surfaces, which can almost reach photographic quality, and fragile traces of the work, which are created by brush or hand, combine to form a heterogeneous pictorial space, which only merges into a unity in the eye of the viewer, because: "The picture is created in the mind. The titles of the works help the viewer on the track. Partly borrowed from Homer's "Odyssey", they take him on the odyssey into the realm of shadows and from there lead him back into the light. 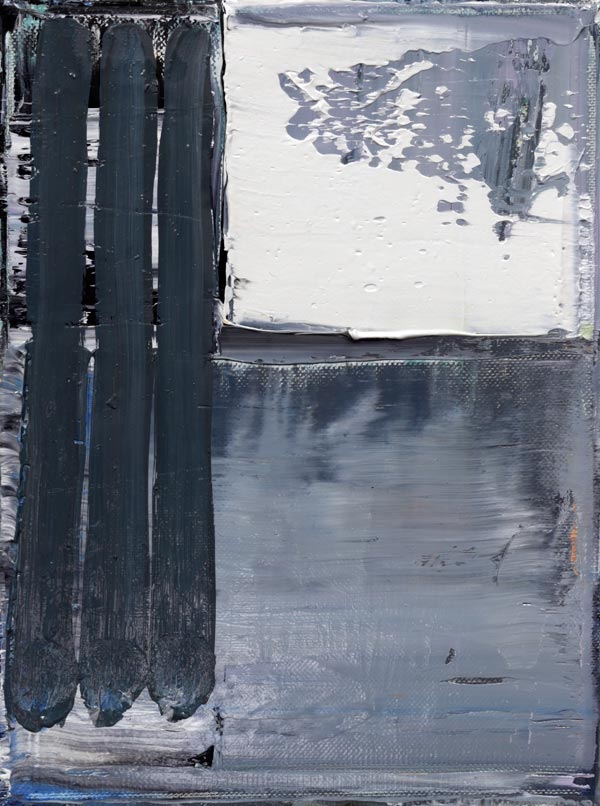